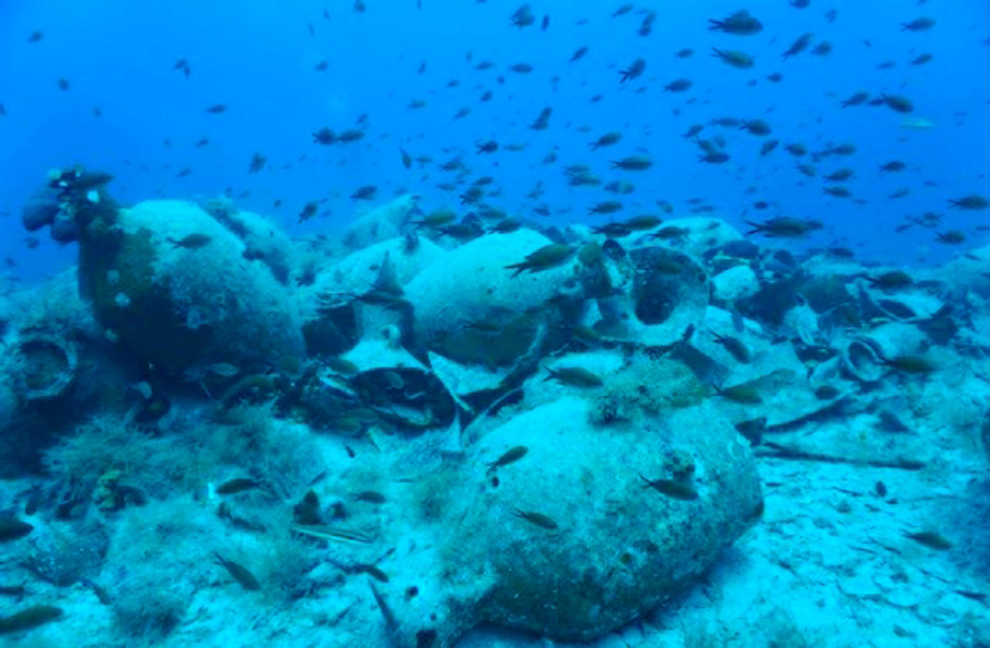 Two new shipwrecks in Delos and Rhenia islands. From May 2 to 20, underwater archaeological research was conducted in Delos, under the direction of the Hellenic Federation of Hellenes Abroad, Angeliki C. Simoshi. The co-ordination and scientific responsibility of the research was carried out by DEA’s archaeologist, Magdalini Athanasoula. Mrs. Aikaterini Tagigidou, a diving architect engineer of the SEN, was also responsible for the surveys.

The research was carried out in collaboration with the French School, JeanCharles Moretti director of the excavations of Delos, as well as the National Hellenic Research Foundation, with the participation of the diving archaeologist and architect Dr. M. Zarmakoupi. The survey was also attended by Lionel Fantin, a scuba diving engineer from the French School, while technical support was given by Mr. Spyridon Moureas, a laborer working in the NCA.

It was founded in a lithosphere (pile of rough stones) while in the superstructure it was largely made of impressive granite blocks. The dating of its construction is still unknown and only future archaeological and geological research will give evidence of this. Building walls and structural elements of a fallen colonnade were also depicted on the seashore along the coastline inside and north of the holy port.

To the north of the jetty and to a small depth, the remnants of a shipwreck of the late Hellenistic era, with a main cargo of amphorae for the transport of wine and oil, from Italy and the Western Mediterranean. In the framework of the survey, two more shipwrecks were detected and mapped during the previous research periods in the sea areas of Fournoi and Kato Keralele. In addition, two new shipwrecks of the late Hellenistic era were located in Heronissos (at the southern tip of Delos) and Riegeia at the Brochure bay.

The shipwrecks in Chrononisos of Delos, in the Book of Rhenia and in Kato Kerrenale, as well as in the main harbor, belong to the period of the greatest prosperity of the island (end of the 2 nd to the beginning of the 1st century BC), a bit before the destruction of Delos from Mithridates and the pirates of Cilicia.

The finding of amphoras dating back to periods later than the Delos (2nd-4th century AD) destruction, as well as the above-mentioned Fourn’s wreck, show that the island not only ceased to be inhabited but also played an important role in trade and shipping of this era.

The identification of coastal archaeological remains, harbor facilities and the detection of a large number of shipwrecks of various seasons, as well as the identification of new wrecks in the Delian-Rhenia channel, as well as the new important finds that have been found (tables, lutes, bowls and intact clay culinary vessels) confirms that Delos was an important commercial base and an important timeless commercial maritime road linking the eastern and western Mediterranean. The results of the survey help to complete the archaeological and historical image of Delos, which reinforces the need for the systematic continuation of the underwater exploration of the island.

The cost of the survey was covered by the EAC. the French Archaeological School and the Society for the Promotion of Roman Studies.