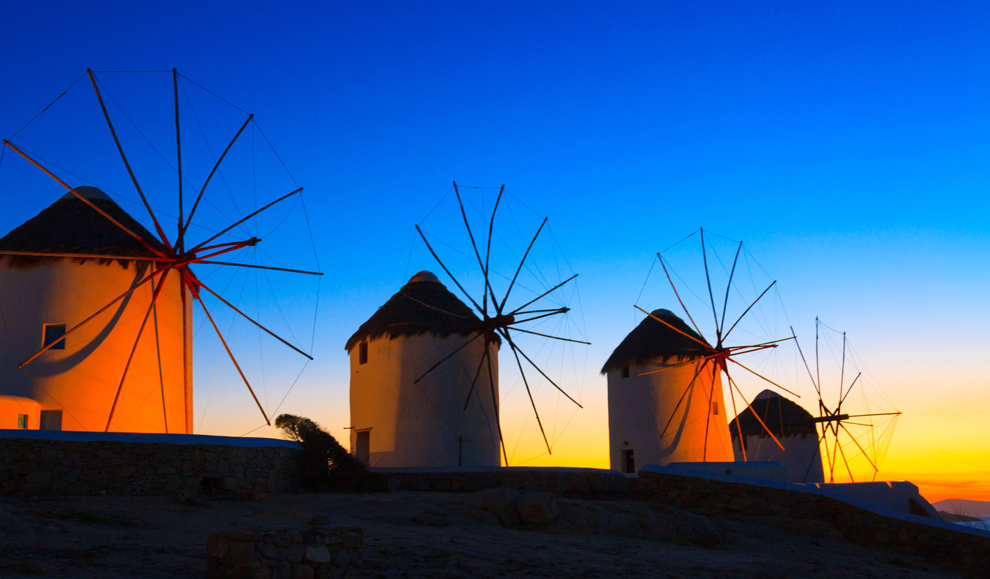 The Island Culture. The small group of islands of Mykonos, Delos and Rhenia (total area little more than 100 km2) is certainly one of the temporal most prominent parts of the world, not only because of modern tourism and secular movement, but because this area was inhabited, developed and It became a cultural pole before the dawn of history.

One reason is the strategic location of these islands -in center of the Cyclades, located literally between East and West – North wind and the South, near the largest and richest Aegean islands and, especially in the land Greece and Attica, so have developed in each historical period, important trade and me- have respectively received continuous cultural influences Deci- almost all the centers of the Aegean and the Mediterranean beyond.

Following the discoveries of recent years, is known prehistoric settlements dating back to 4,500 BC (Such as elm) and, from the 3rd millennium BC already, it seems important settlements developed on all three islands. The site also connects multiple with Greek Mythology (birth of Apollo and Artemis, Epic Cycle) has a significant presence in Mycenaean times (2nd millennium BC), later inhabited by Ionians and subject to the Athenian sphere of influence to the end the ancient Greek world, highlighting this period one of the most important religious and then economic centers of the ancient world, Delos.

Following the wavy course of history, the island complex will meet the Romans and the Byzantines, Venetians and Ottomans, remaining always important passage for maritime trade between East and West. Thus, in modern times, Mykonos became a regional naval and commercial center that flourished as the second industrial revolution in the second half of the 19th century.After a recession of a few decades in which the old bourgeoisie of the island moved to larger centers, tourism, new international economic, social and cultural phenomenon, it began to develop here in the 1920s and 1930s.

Those who believe that Mykonos is made only for cosmopolitan life and frenetic fun, will find in front of them a pleasant surprise when they discover its culture, which follows the island all these years and holds firmly the island on top place on the list of tourism popularity…

The current economic development of the island in line with a corresponding social progress and cultural uplift. This is underlined in the last 15 years by the action of the municipal cultural center, otherwise: the ‘DEPPAM’ (The ‘Municipal Enterprise of Cultural Projection and Growth of Mykonos’) and the latest Cultural Organization “George Axiotis” which have, on behalf of the municipality, set a common goal: to serve the needs of the contemporary Mykonian society and Mykonos cultural recognition in the hearts of friends and patrons of.

Both operators reveal their work another side of the island, different from the standard of the media and widely known, but equally important for locals and visitors. The side of quality entertainment, artistic movement, culture…

Since decubitus 1994 DEPPAM as an autonomous Municipal Cultural Center, managed to develop gradually varying actions, either by creating and establishing cultural institutions, or supporting other social – cultural initiatives, which currently provide at the island a good level of cultural life, adequate information, rich entertainment and remarkable social movement, throughout the years.

The DEPPAM it is situated in the center of Chora, in renovated historic building complex Zervoudaki – Inglessi consisting of two comfortable middle-class houses of the 19th century. On the ground floor houses the children’s Philharmonic, and the exhibition space of the municipal gallery. On the ground floor there are also classical and popular musical instrument teaching spaces. T

he Municipal Art Gallery, the home of Mykonian Mary Inglessi painter, hosts occasional exhibitions of painting, sculpture, photography, etc. On the first floor of the building is the Multipurpose Hall of DEPPAM with capacity of 150 people, which are organized throughout the year lectures, meetings and conferences, as well as film screenings and various other cultural events. Other important cultural areas that leverages the DEPPAM as part of its activities, is the stoned Open Theatre of Lakka, (about 700 seat capacity), where are organized musical and theatrical events and the summer cinema “Cine Manto”, (200 seat capacity) in the public garden of the I. Meletopoulos, at the region Lake, where projected all the summer films.

A similar effect has the action of the Cultural Foundation “George Axiotis” created after the merger of municipal entities into one (the Cultural Centre, the Municipal School of Music and the Philharmonic) and located in the new complex of ‘GRYPAREIO Cultural Center’ built before a few years to be donated to the municipality in 2006 from Nikos and Sophia Grypari. The building (surface 1.600 m2) is located in an area of ​​14 acres, just 1 km away from Chora, on the road to Ano Mera, in Argyraina. Cultural events, film screenings, theatrical and musical performances, etc. It has a main hall for about 350 people, with 80 m2 stage, an elegant foyer and other smaller rooms for training, etc. Outside there is parking and a playground.