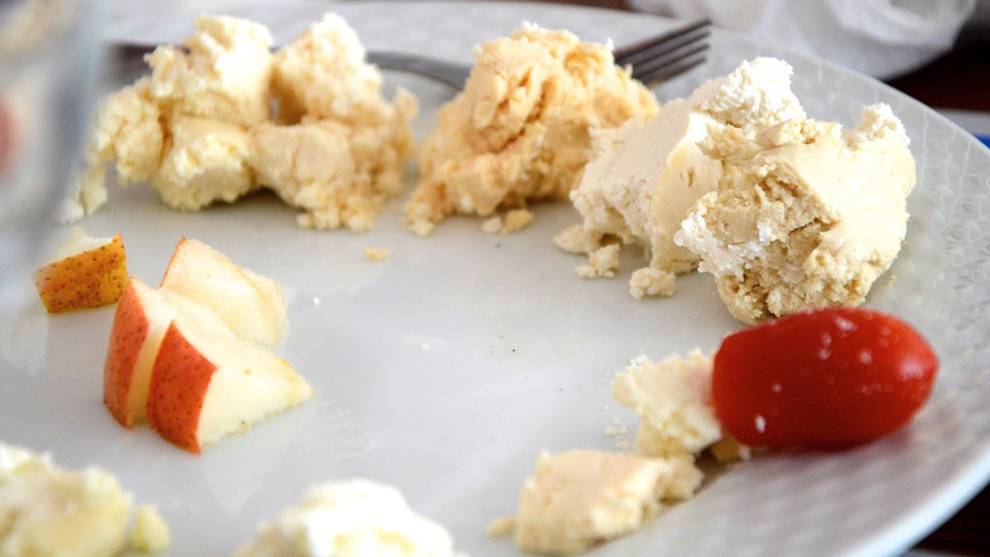 Louza of Mykonos is a very characteristic and delicious snack which competes in terms of preference, for those who have tried the Greek delicacies, with the –also famous– sausages of Mykonos.
This is a traditional type of cooked pork meat which is produced by homegrown veal and includes the whole of the fillet from the back of the animal with the bit of the fat that covers it. This dries up and is “broiled” by the north wind of the beginning of winter and the sun, prepared with a lot of salt, pepper and other spices (thribi). After it has well seasoned that way, louza can be preserved for as much time as we want in the freezer, so that it won’t lose its freshness after it has dried.
It is served as a delicacy, cut in thin slices which take the colour of dark rosy red and leave all its tastiness and rich aroma to the mouth. This is the ‘delicatessen’ of Mykonian gastronomy.
The small louza, which is made from the other back muscle of the hog – “porterhouse” –, is even softer and is called “bouboulo”.
* Lonza, in the Italian South. In Cyprus, it is known as “lountza”.

Kopanisti of Mykonos is a characteristic, very spicy cheese, which the tasters appreciate for its special peppery tastiness.
It excellently accompanies ouzo and any other strong Greek aperitif, on bread or –in the Mykonian way– on sop barley rusk, together with tomatoes or cucumber. It can also be mixed with butter or some other white cheese to produce a lighter taste, but then the mixture cannot be preserved.
Kopanisti is the result of a controlled and repeated fermentation which is done through the care of the traditional cheesemaker on a base of a homemade mixed cheese (from goat and sheep milk), which is easily preserved after maturing in an earthen or glass jar.
Its making is also known to other Cyclades islands, but it is far different than the kopanisti of Mykonos which is largely considered as a very strong and aromatic one.

If we cannot live anymore today with the same strict traditional way of the old Mykonian life, with all the things that concerned the seasonal diet and the existing products in the familiar nature, let as see at least the alimentary habits of old Mykonos, and perhaps this will make us understand one more time that our ancestors, in that simple and sometimes deprived life that they lived, they had a harmonious coexistence with the nature at each season.

Rich in variety of grasses and various other vegetables the local vegetation mainly now in spring that we live also in the season of Saint and Big Sarakosti, is offered for vegetarianism on various ways in cooking. All these without a lot of labor, expense and search for what is needed for the family, due to their existence next to us.

From the beginning of Sarakosti, for the conscious religious mykonian woman, mother and housekeeper, this is a mental fight, because apart from the daily care for diet, she wants at the same time to convince, to enlight and teach to her children and grandchildren this mykonian diet. From the morning of the Clean Monday , she would prepare a small basket with some wine and Sarakosti’s food for the children.

From this time and beyond a match of 48 days begins for herself and her family, in order to find each day the necessary Sarakosti’s food and in the proportional quantity and variety that is required for the needs of a crowded family. And how would she convince all her family that this season they should all be prepared in order to accept the Easter worthily and as good Christians, and that this is the only way to achieve that: They should forget the meat, the eggs and the fish. Season in which as Melpo Axioti (Mykonian novelist) says in her book “My house”, the name “meat” is not allowed otherwise you shall sin!