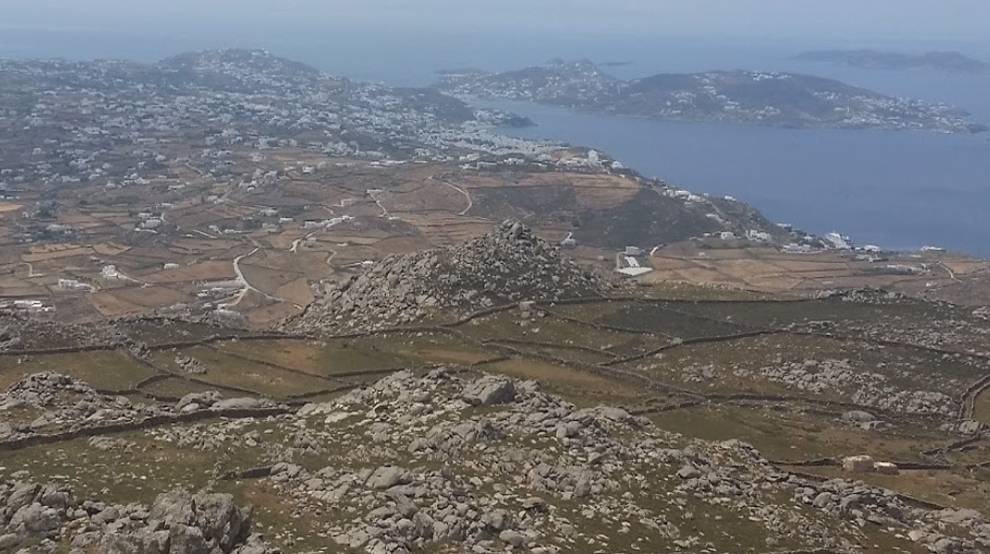 The Marathia Dam in Myconos was build in the northwestern side of the island, approximately 4 kilometers in a straight line from the town of Myconos, on the torrent Marathias about 500 meters from the sea. The aim of this work is to exploit the surface flow in order to confront the need of water in both supply and irrigation due to the risen need presented during summer.
The technical characteristics of the dam are the following:

The Dam of Ano Mera

The dam of Ano Mera is located on the northeast side of the island, in direct proximity to Mykonos town about 10 km, over the torrent Maou Lagada approximately 600m from the sea. The aim of the project is the development of surface runoff to meet the requirements for water for irrigation and water supply. The reservoir of the dam has 1.000.000m3 capacity.

The general view of the Cyclades landscape and especially that of Myconos is mainly composed by the brushwood, the makkia and the bare rocks. Between the brushwoods various kinds of annual and bulboid plants find a shelter. The water habitats of Myconos present a ornithological interest and they are a part of the course of migrating species under extinction.

The maximum length of Myconos is approximately 14 kilometers and width 10. The coasts form gulfs that penetrate deeply into the land. The most important gulfs are those of the Panormou and of Ornou. The Ormos Panormou and the hills in the south of it, divide Myconos in two areas, which present though common geological characteristics. The island is mainly hilly, while near the coasts there are no large flat surfaces. Two small incline zones can be found in the island. The first one is to the east of the town of Myconos and in a scale form above of it with hills in B and A, between the heights of 80 and 120 m. In its northern borders it closes to the east and ends to the area of Ftelia. The biggest part of its surface flow ascends to the area of Marathias. The soil is rough and hard, while the morphology of the island is mountainous and semi-mountainous. The second area of small inclines is located to the area of Ano Mera between the similar heights of 50 and 100, it is surrounded by hills and its draining takes place with several gullies that are small in length and not to deep.
The highest tops of the island is that of Profitis Helias of Ano Mera (341 m.) and two neighboring tops, that of Bardies (372 m.) and Profitis Helias (386 m.) at the north of the town of Myconos.
The total size of the island is 26.370 acres, out of which the 3.950 are cultivating lands or lands that cultivation has stopped for a small period, the 10.250 acres are used as grazing areas, 500 acres are covered by water, 630.000 acres are seized by the settlements and the rest 5.350 acres are other areas mostly rocky.

The biggest part of the island is covered by granite – granodioritic rocks that have the characteristic corrosion of granite with the curved boulders and the granite sand. The tops of the hills have been washed from the products of weathering, while in the gullies and in the areas of small inclines the concentration of sandy material is raised. The participation of wind is also important to the corrosion and transfer of the material. At the mouths of the gullies various sandy beaches are formed with a good supply of granite sand.
Myconos is composed almost entirely out of granites – granodiorites. The granite of Myconos is biotitic, cerostilbic, gneusoid porfiritic granite. From the same granite the island of Dragonisi as well as Kythnos is composed and the central hill of the island of Delos. In this granite some times biotitis and other cerostilbis prevails. Depending on the area it changes into graniodiorite and afterwards to diorite, whereas it is common to have a gneustoid character. The gneustoid character is a result of the mountain-genetic movements that took place after the penetration and crystallization of the magma inside the transformed crystaloschistodic matter of the area of Attica and Cyclades. In some parts it looses its gneustoid character and has a specky tissue without loosing its porfiritic character. For example, in the area of Kalo Livadi the granite of Myconos changes into biotitic and gneusoid and afterwards in small speck granite loosing its porfiric character.
In the coastal zone of the NW side of Myconos the granite changes into small speck with intense gneusoid character. The hydro-geological characteristics of those magmatites are generally the same with that of the analogous formations of the surrounding islands.