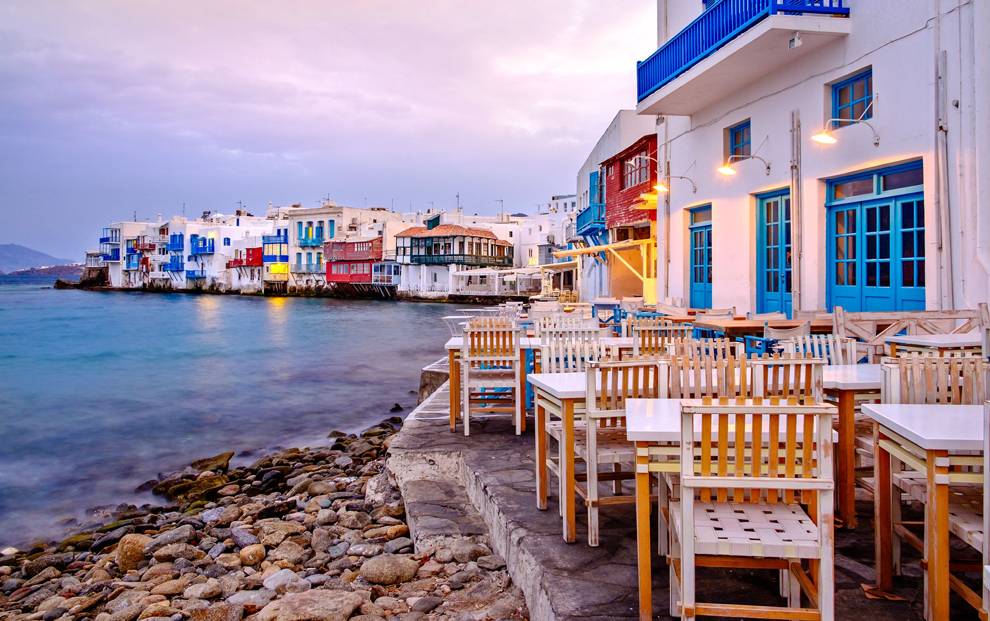 According classical mythology, the Giants killed by Hercules in a fierce battle, are buried on the island under imposing blocks of mykonian granite. The name “Mykonos”, somewhat pejoratively, means a mass of stones’ or a rocky place; a later tradition attributes the name of the island to a hero by the name of Mykonos, the son of the king of Delos, Anios, who was the son of Appolon and nymphe Rhoio- a descendent of Dionysus.

The Kares and Phoenicians may have been the first inhabitants of Mykonos, but Ionians from Athens were established colonists and in control of the island by around 1000 B.C, having expelled the previous occupants. Historical sources confirm the following: in ancient times there were two towns on the island; in 490B.C, the Persian generals Datis and Artaphernes made a brief stopover in Mykonos; It was a poor island with limited agricultural resources. In ancient, pantheistic times, Dionysos, Demetra, Zeus, Appolon, Poseidon and Heracles were the principle gods worshiped here. Later in history the island belonged to the Romans and subsequently to the Byzantines, who have fortified the island against the Arab raids of the 7th century, kept control of it until the 12th century.

After the fall of Constantinople, at the end of the 4th Crusade (1204), the island was occupied, as their seigneur (stronghold) by Andrea and Jeremia Ghisi – relatives of Dandolo, the Doge of Venice. In 1292 it was looted and pillage by the Catalans, and, subsequently, in 1390, given over to the Venetians, in 1390, by the last of the Ghizi overlord. In 1537, while still under Venetian domination, the island suffered a catastrophic attack by Barbarossa, the admiral of Souleiman the Magnificent.

Later, under Kapudan Pasha, the head of the Ottoman fleet the island is practically self-governed, according to the system of the period, by a functionary called a “voivode” and a council (body of “syndics”) who always tried to maintain an equal distance from both Turks and Venetians (the last of whom withdrew definitively from the region, in 1718, after the fall of the castle of Tinos to the Ottomans).

The population of Mykonos Island (which during modern times has fluctuated, generally from 2000 to 5000 people) was increased by colonies of immigrants (from nearby island and as well as from Crete) during time of starvation and epidemics which often followed the periods of conflict, until the late 18th century.
The Mykonos, who throughout the same period were known as excellent sailors, were successful in trade and shipping and, also, piracy was not unheard of… Many islanders were active in the “Orlof Insurrection” ( led by the Orloff brothers, 1770-74), which resulted favorably, for them as well as for Catherine the Great in, due to the very profitable treaties concerning trade between the Ottomans and the Russian Empire.

Soon after the out break the Greek Revolution 1821, the Mykonians, roused and led by the lady Mando Mavrogenous (an- aristocrat educated with the most fervent ideas of the Enlightment- who become a popular nation heroine) successfully impeded a landing of a squadron of the Ottoman fleet in 1822. They participated actively in the war , with four armed ships (two of the totally outfitted and supplied at Lady Mando’s expenses ; before the war over she had spend almost all of her , considerable, family fortune).

After the establishment of the modern Greek State, the activity of the local upper- and lower- middle class revived the island economy through the consolidate of trade relations with south Russia, Moldavia and Walachia. Mykonian merchants were established in Constantinople, Smyrna, Alexandria, Syros, Livorno and Marseilles.

The predominance of stream technology over the traditional commerce of the sailing ships, at the end of the 19th century, the subsequent opening of the Corinth Canal (1904) and the upheavals of World War I resulted in a depression of the local economy; many Myconians left to find work abroad (mainly in US) and in the going centers of mainland Greece (Piraeus, Athens). The development of tourism in the following decades has provided a means of the islands’ economy development.

The prolonged excavations of the French School of Archeology, begun in Delοs Island in 1873, focused attention on the region- at least that the happy few who, attracted by the charm of classical Greece, had the means and the opportunity to travel. In the early 30s already, many famous artists, politicians and wealthy people, mainly from Europe, began spending vacation on the island, attracted by its unique atmosphere. Mykonos has adapted well to the post-war situation and the gradual growth of the tourism industry in south Europe: the island has turned into a cosmopolitan locale and is one of the most successful growth – models, of its type and scale in Europe.